The history and prosperity of the State of Washington is one which follows the growth of its navigation and transportation systems.  In the Wenatchee Valley, Eagle Transfer Company, along with the rest of the Eagle Group of companies, has been part of that history since 1903.

Nestled on the Eastern plateau of Washington between the Cascade Mountain Range on the west and the Columbia River on the east, Wenatchee was a hub in North Central Washington for both river and overland transportation routes. Eagle Livery& Transfer, as it was known back then, was responsible for hauling mail from the train depot to the post office, taking baggage and passengers to and from the boat landing on the Columbia River, moving heavy loads of newsprint to the Wenatchee Daily World, watering the dusty main street, and delivering postal service to remote locations.  Eagle was a major provider for the growing town of just about any moving or hauling service that was needed, and as time went on, those services reached out beyond the valley.

As the area grew, and modes of transportation evolved, Eagle Transfer kept pace.  Livery services gave way to storage and a variety of other services, including operation of a highway post office to outlying areas for 10 years.Eagle won the shipment management contract for the 1950’s construction of the Alcoa plant south of Wenatchee, and as a Lyons Van Lines agent, also handled movement and storage of household goods for Alcoa’s new employees.  As Wenatchee grew, Eagle was right there to help it happen.

In 1960, Eagle Transfer became an agent for North American Van Lines, and over the next several years also provided “piggyback” service (road movement of rail containers) in North Central Washington.  Eagle became an agent with United Van Lines in 1979, and moved their growing intermodal service into a new company (Eagle Systems, Inc.) to concentrate on moving/relocation and storage services.  The construction of a 75,000 square foot storage facility in the 1990’s, and the addition of HomePak self-pack services several years ago increases the value Eagle Transfer provides to the families and businesses it supports with its customized moving services.  These days, Eagle is just as likely to be moving equipment for a server operation as they are to be helping a family settle into a new home, or providing storage during a home or business remodel.

In the early days, Eagle Livery was staffed by transportation pioneers who had a strong Northwestern spirit. That spirt is still part of the service Eagle Transfer provides, more than 100 years after it was founded.  Since 1903, “Strong Tradition, Strong People, Strong Vision” has been the Eagle way. 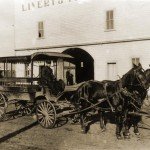 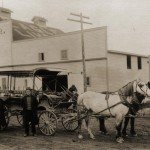 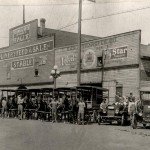 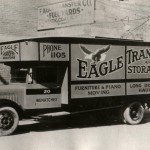 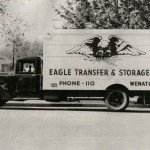 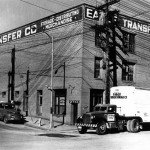 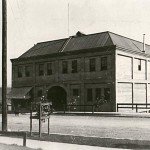 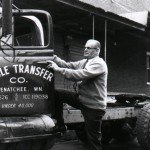 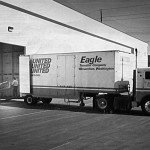 Moving you with pride for over 115 years.